The Domesday survey, made within 20 years of the Norman Conquest, describes a church at “Stoche,” an Anglo-Saxon word which implies a timber-palisaded farmstead. The present placename of Stoke D’Abernon is an amalgamation of the original Saxon name with the surname of Sir Roger D’Aubernoun, who was rewarded with land in Surrey for his services to William the Conqueror.

The original church, substantial portions of which survive on the south side, was built in the late 7th or early 8th century and so belongs with the scatter of south-eastern churches that immediately followed the introduction of Christianity to southern England in 597 by St Augustine. Its particular importance is that Stoke D’Abernon was from the beginning an "ecclesia propria", (a church built on private land by a feudal lord and over which he retained a proprietary interest, especially the right to appoint clergy) and is the earliest English example of a church which had a thegn’s gallery or Lord’s seat entered via the high-level doorway still visible in the south wall. This was probably in use until the 13th century, when the current square chancel was built, thus providing the Norman lords of the manor with a chapel of their own behind the altar, which then stood only a little eastward of the narrow Saxon chancel arch.

13th Century Stone BenchThe D’Abernon tombstones with their brasses would originally have been situated below the east window. The 13th century stone bench seat surrounding the whole chancel is still prominent and a rare and important survival of this manorial arrangement. 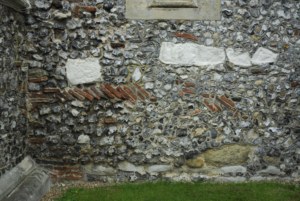 Roman BrickworkNeolithic artefacts hereabout suggest that Stoke D’Abernon may well have been inhabited from prehistoric times and thus proved convenient for the Romans to take over. Numbers of bricks, tiles and worked stones of Roman origin were used in building the Saxon church and are easily distinguishable externally in the south nave and chancel walls, among the large field flints of which the walls are otherwise constructed. A drawing of 1828 by Twopenny (which can be seen in the north transept) shows the original Saxon chancel arch,  undoubtedly constructed with re-used slabs of Roman cornice. The Saxon chancel arch was an unfortunate casualty of Victorian rebuilding work carried out in 1854 and, subsequently, 1866 when the present, much wider arch was constructed. 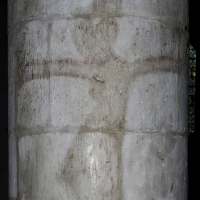 Faded Painted CrucifixAfter 500 years unaltered, the north aisle was added in about 1190 and the pillar and two Transitional pointed arches of this enlargement survive today. A faded painted crucifix from the same date can be clearly seen on the pillar and several medieval pilgrim crosses are cut into its lower part. Stonework of the filled 13th century porch, very evident without, is exposed in the south wall of the nave. This was the entrance to the church until 1866 and is almost certainly a modification of the original Saxon doorway. The external holy water stoup is a 15th century addition. Below the pulpit and also dating from the 15th century is a piscina (a shallow basin placed near the altar used for washing the communion vessels), its drain concealed by a stone rose, and this serves as an interesting reminder of the presence of a previous medieval side altar. 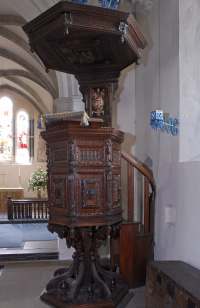 St Mary's PulpitAt the front of the nave, to the left of the chancel arch, is an imposing renaissance statue of the Madonna and Child. This dates from about 1500 and is of North Italian origin.

At the front of the nave are three splendid items of church furniture:-

The pulpit of St Mary’s, heptagonal and made of English walnut and of Mannerist design, is among the finest 17th century pulpits in the country. The sounding board has its original superb wrought-iron supports of Surrey or Sussex workmanship. Sir Francis Vincent added his arms and family motto to the tester after he became a baronet in 1620. Curiously carved caryatid figures (part animal, part human, bearded and each bearing a single female breast) form the supports of the pulpit. On one of the panels in raised gilt letters is the text FIDES EX AUDITU (“Faith comes from what is heard” – Romans 10:17), notably positioned so as to be visible primarily to the priest ascending the pulpit, not to the congregation. The 17th century wrought-iron hourglass stand, fastened to the wall close to the pulpit, is a silent witness to the lengthy sermons of the puritan period.

Church ChestThe church chest below the pulpit dates from the late 12th or early 13th century. It was used originally for vessels, vestments and parish records but also for money offerings, as is shown by a slot in the lid and a singular receptacle below. It is probably one of the chests ordered in 1199 to be made and placed in all churches and is one of the best preserved of these still extant.

Gilded Eagle LecternThe handsome and unusual lectern dates, like the pulpit, from the 17th century and its gilded eagle is English. The salmonic column, typical of the baroque style, is uncommon in England (although Wren made use of it) but this, with its Italianate flavour, could be the work of a continental craftsman living in this country. It is made of oak, whereas limewood would more commonly have been used for such work outside England.

At the west end of the nave stands the outstanding organ of 16 ranks, one of the finest instruments of its kind in England. This was designed and voiced expressly for the church by Frobenius of Copenhagen in 1975. Nearby under the tower is the font, which dates from about 1480.

The Chancel and Sanctuary

Mural PaintingDuring the reign of Henry II, at around 1240, the rounded Saxon apse was replaced by the present square-ended chancel, with fine quadripartite stone vaulting. It has star ornament and roll moulding on the ribs, a gilded boss carved as a rose (the emblem of the Virgin Mary) and delicately proportioned shafts rising from the surrounding stone seat on moulded bases. The axis of the chancel, probably aligned on the contemporary sunrise, inclines 4 degrees to the north of that of the nave. The east wall was decorated with a 13th century mural painting of the Adoration of the Lamb, of which there is a surviving section to the right of the East window. In the early 14th century a large east window was opened up. An old walnut cartouche over the Rector’s stall bears the arms of King’s College Cambridge, patron of the parish.

The furniture in the sanctuary dates from the 17th century. The altar-table is Laudian, about 1620, and has a moveable top. The altar rails and remarkable English baroque aumbry (a cupboard or safe in which the Holy Sacrament is kept) are of a similar period. The aumbry, of oak carved with cherubs, a stylised pelican, phoenixes and acanthus, appears to be unique in an English church and may have been made originally for the oratory of a recusant country house or for an ambassadorial chapel.  The onyx flower pillar dates from the late 18th century and is thought to have come originally from the Royal Pavilion at Brighton. 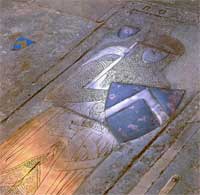 D'Abernon Knight
14th Century BrassIn front of the altar rails lie the famous brasses of the two Sires John D’Abernon, the elder and the younger. Contrary to oft-repeated claims that the brass of Sir John the Elder is the oldest in England, the brasses actually date from about 1325 and 1350 respectively. The great brass of Sir John the Elder is, nevertheless, unique in showing a knight holding a lance as well as a sword, very rare indeed in possessing original enamel in the shield, and of workmanship such that, if not the oldest brass in England, it can rightly claim to be the finest military brass in existence. 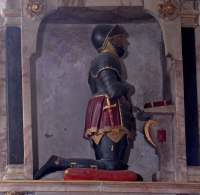 Memorial to Sir John NorburyThe chapel is dedicated to St John the Baptist and St James and was built during the reign of Henry VII by Sir John Norbury, possibly in thanksgiving for the part which he played at the Battle of Bosworth Field in 1485. It is accessed by a fine pair of 17th century Italian wrought iron gates. The coats of arms of the Lords of the Manor, from the D’Abernons to the Vincents, are glazed into the north and east windows and reveal the interesting fact that in 500 years the inheritance passed through seven surnames, always by the female line.

There is a monument to Sir Thomas and Lady Jane Vincent (1613 and 1619) against the north wall and another on the east to their daughter-in-law Dame Sara Vincent, who died in 1608. Her children, in an attitude of prayer, are carved as weepers on the plinth of the tomb. The tomb of Sir John Norbury, who died in 1521, once stood under the archway forming the eastern bay of the chapel but Sir John is now commemorated in the south-eastern corner of the chapel by the delightful little kneeling figure of a knight in armour of the time of Charles I, with his original tomb-brass below it. Today the site of Sir John’s lost tomb is occupied by the tombstone of the first known Rector, Sire Richard le Petit, who lived in the 13th century. The 15th century funerary helm hanging above it was used at the funeral of Sir Thomas Vincent in 1613. Below this, encased in the east wall in a stone Roman cinerary coffret from the 2nd century AD (the oldest artefact in the church), rest the ashes of Sir Edgar Vincent, Viscount D’Abernon, HM Ambassador to Berlin 1920-26, whose death in 1941 brought the tenure of the D’Abernons at Stoke D’Abernon to a close after nearly 750 years.

For Church opening times during the current Covid restrictions please go to the Visiting St Mary's page for more details.